The Broward County Civic Arena, commonly known as the “BB&T Center” is a major multi-purpose entertainment and sports venue. It was designed and constructed for professional hockey, sports, entertainment, and community events. Completed in 1998, the BB&T Center is roughly half way through its estimated economic life of 30-35 years. As a first-tier arena, the BB&T Center is home to a mix of sporting events, major artists, and entertainment performances that attract large audiences. The Florida Panthers professional hockey team is the arena’s primary tenant and play their home games in the facility under a License Agreement with Broward County through 2028.

Broward County sought a comprehensive development vision for transforming the Arena Site into an iconic and dynamic destination that is complimentary to the existing sports and entertainment facility, surrounding neighborhoods, businesses, and developments that are both planned and underway. Development of the site is intended to generate positive economic returns to the cities and the County. 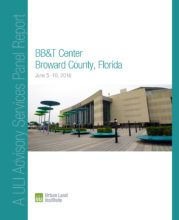 View Will open in a new window
Forgot password?